The perfectly legal pinching of plants...

Once plants are growing one of the jobs of a grower is to make them shine and be at their very best when they go out for sale. Nobody wants a thin and lanky shrub when they could have a strong, bushy plant instead.

To encourage certain plants to 'bush out' we pinch the tips of their stems; by 'pinch' I mean we remove the topmost growth, often about 3-4" but it can vary greatly according to the species and how it's growing. This action redistributes chemical messengers called auxins in the plants stems and causes dormant buds further down to break make the plant grow bushy. 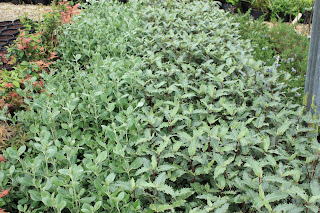 As you can see, they are growing away happily in the tunnel... 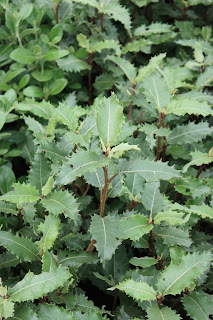 With each batch you have to 'go by eye' and pinch back the tops on each plant to the same level each time, leaving the whole batch a uniform size. For tough stems you need a pair of sharp secateurs, but most of the time you are pinching out very soft new growth long before it gets woody, so pinching out the shoots with your thumb and forefinger is the easiest, and most importantly the fastest, way to do it.

This all sounds a bit pedantic but is actually very important- can you imagine how annoyed you would be to plant a hedge where some plants were taller to start with than others?! Doing this at home it might seem even more pedantic, but planting out a group of plants of a roughly uniform size will be more aesthetically pleasing, so pinching out new growth to create uniform bushy plants is well worth doing.

The pinched plants are then loaded to be hardened off outside- the soft new growth has mostly been removed, so hopefully as the new shoots appear they will be tough enough to stand up to conditions outside the polytunnel. 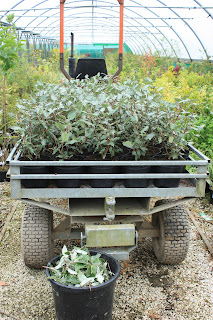 Off they go- Olearia macrodonta pinched back and loaded on their trailer for the short trip to the outdoor
growing area. The pot in front contains all the pinched shoots from this load alone!

Also on my 'urgent' list of plants to pinch back are the Camellias, particularly varieties prone to making long growths in spring at the expense of growing bushy. 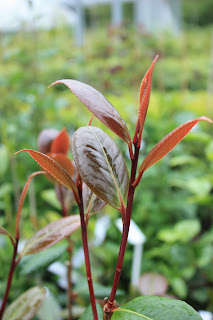 Camellia 'Les Jury'- just admire that fabulous new growth... before I pinch it back! 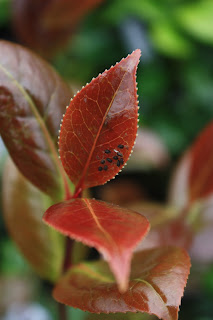 Still, as I pinch the new growth back I can squash these little sods before they become a plague!
When it comes to garden pests prevention is better than a cure...

Posted by Pots and Polytunnels at 12:31 No comments:

When we're potting or handling plants at the nursery we very occasionally notice something interesting about the root systems of the plants that we're handling.

We're quite used to the lovely citrus smell of disturbed Magnolia root systems, but more recently a perennial plant to us gave us quite a surprise.

Kniphofias ('Red Hot Pokers') have fluorescent yellow roots that look like the result of some sort of experiment... take this young plant of Kniphofia rooperi: 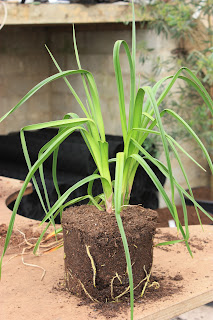 And here's a close-up of it's roots: 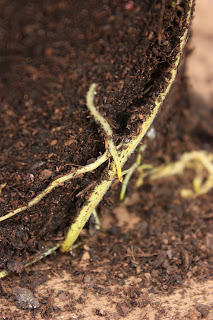 Not the best picture as you can see, but just look at the colour of those roots! We're quite used to this feature of Kniphofias, after all we notice it every time we turn plants out of their pots to see if they're rooted.

Every so often we have a few plants of another South African, Wachendorfia thyrsiflora, and this has fluorescent orange roots. Again, here is the plant: 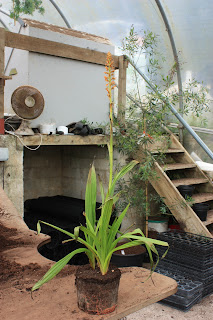 And a close-up of it's roots: 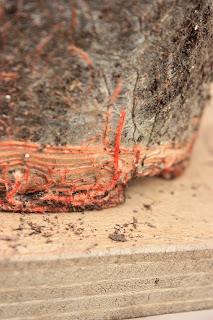 I for one have no idea why these plants have evolved such brightly coloured roots, and would be open to sensible suggestions... all I know is that enjoying the little remarkable details of the plants we grow is one of the perks of the job.

If you would like to see this and other Wachendorfias in the wild I would recommend a quick look here.

I know, not very exciting but a bit of fun anyway.

Ben
Posted by Pots and Polytunnels at 06:16 No comments:

Pots and Polytunnels- an introduction

After much deliberation I have now motivated myself to create a blog. As a professional grower for a nursery in Cornwall I get to learn a lot about the plants that I am growing, as well as a lot about the trials and tribulations of growing plants for other people.

A little background; we're a small team on a fairly big nursery. We grow trees, shrubs, perennials, the occasional bulbs... no annuals. Our stock ranges from the 'bone hardy' to the very tender, from the easy to grow through to bl**dy nightmares! 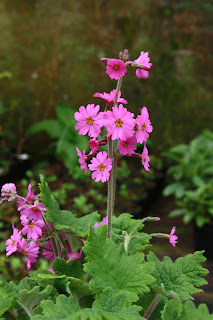 Primula polyneura- not an easy species if you don't have the right conditions.


I hope that sharing my experiences of growing plants commercially will prove interesting. Be warned though- I may shatter illusions of how plants are grown; nursery growing is hard work, everything is practical, everything is efficient... Here you will see how it is done.

One thing, though: this is my blog and does not necessarily represent the views of my employers- granted I often think they should agree with me... but views expressed here will be my own!

So time to get started.

Ben
Posted by Pots and Polytunnels at 02:32 No comments: