All you could ever want to know about irrigation...

Plants in pots rely on us almost entirely to supply their needs- being artificially separated from natural soil means that they are unable to send their roots great distances in their quest for food and nourishment. Whether a plant is potted in a garden or a nursery it must be cared for with the same diligence that a person uses to ensure the well-being of an animal. Because plants cannot 'tell' us they are hungry or thirsty means that we must always be looking for the signs, and that we must be ready to act at very short notice.

Watering large numbers of plants by hand is very time consuming, so irrigation systems are installed to save time. Here is an explanation of the methods of irrigation that you will see on most nurseries, either as an employee or a visitor.... 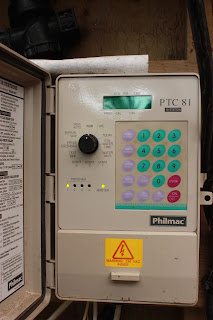 On the nursery we have lots of separate areas irrigated by a complex system of pipes and valves controlled by computers (see left); if an area is uniformly dry we assess it's requirements and, if necessary, run the irrigation for an appropriate length of time. Likewise if an area is expected to go dry (e.g. on a dry weekend) we can assess the area's requirements and set up the automatic system to water when we're not around. On a busy nursery the ability to water large areas overnight saves a lot of time and allows staff free access to tunnels etc. during the day without getting wet! Also being able to water areas during the night allows the irrigation cycle and hand watering activities to be spaced out sensibly over 24 hours, spreading water consumption out through the day, which in turn means that we don't need as much storage- this is crucial if you have no mains water!

All irrigation systems use broadly the same principle: run water through a section of the irrigation system (either sprinkles, drip lines or flood beds) for a period of time which has been calculated to allow each pot to receive the necessary amount of water. Let's take, for example, a drip system which delivers 1L of water in 10 minutes; if you need to deliver 10L of water into your pots to water them properly you will need to run the system for 100 minutes to make sure they are watered.

Most of the irrigation on the nursery is done by a network of overhead sprinklers which spread water over the plants from above. These are easy to install and run but are fairly wasteful of water, watering over access routes etc., and wet foliage is often a contributing factor with leaf diseases, where the drop of water on the leaf surface acts as the perfect environment for spores etc. to get growing.
The more efficient watering technique is a drip line system. Here small tubes deliver water from a header pipe directly onto the surface of the compost, usually with a spike to hold the pipe in place, stop it getting blocked up (which it would do if the pipe was pushed straight into the compost) and guide the water to where it is needed. The advantage of drip irrigation in containers is that the water is delivered to exactly the place where it is needed at the roots, rather than onto leaves, access roads, straight into drains or onto staff! Also by watering straight into the compost the surface of the compost is kept drier, and this makes it harder for weed seeds to germinate. However, these systems are fairly expensive to install but work wonders for larger stock and any stock tied to lines, but on growing areas where plants are smaller and close together this system would just too complicated and unmanageable to be useful.
Flood beds are a different way to irrigate; stock is growing in what is essentially a large watertight tray with a tap at one end and a drain at the other. To irrigate you simply close the drain, open the tap and fill the area to the required depth with water, leave the plants to soak the water up and then drain the area. The advantage of this system is that you can water a lot of plants from below, directly into the compost, without wetting the leaves. Staff can also work around the area without getting wet (unless they fall into the beds!). There are disadvantages though; these beds are fairly costly to put in, must be pretty well flat, and grow slippery algae on the floor of the bed and on the pots (which need to be cleaned before they are presentable for sale). In order to be efficient with water use the water drained from the flood bed must be collected, stored and cleaned to remove unwanted fertiliser or chemicals before being reused- for most nurseries this would be a horrendous expense for little gain.
Here's a table summarising the benefits and drawbacks of different irrigation systems when compared with watering by hand.

*   do not waste much water.
** excessive run-off can cause problems with mud and/or algae.

Posted by Pots and Polytunnels at 13:35 No comments:

In 2011 our Prime Minister, David Cameron, made a speech about government plans to encourage people back into work after a long period of unemployment. During this speech he lumped the entire horticultural world into the 'unskilled labour' bracket, much like clearing rubbish and other so-called 'menial' jobs. The fact is that we need street cleaners if we don't want to wade through oceans of our own collective filth in towns and cities, and also there is no such thing as 'unskilled horticulture'.

From time to time I speak to customers with the same problem- they've hired in someone cheap “just to do a bit of tidying”, and these unskilled people have destroyed trees or shrubs, or pulled up emerging perennials, young bedding plants, and even in one case an entire area of runner beans already trained against their supports! These are examples of unskilled gardening... people who haven't a clue getting things very wrong. 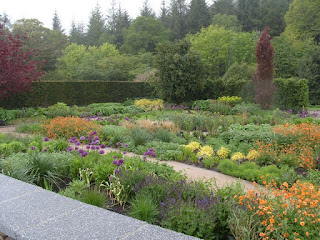 The Square Garden at RHS Rosemoor- from design and planting, to day-to-day maintenance,
this garden has been created and maintained by skilled people.

Horticulture is largely unregulated; although there are qualifications available you can still call yourself a gardener without ever having done any gardening before. Granted not everyone who does not have a horticultural qualification is useless (I myself am self taught, learning skills and techniques through working in horticulture rather from from a textbook at college, and would like to think I know a thing or two about horticulture...), but likewise not everyone who has passed their exams is a good/competent gardener. For anyone hiring a gardener to work on their property it is a real concern; is that person in front of them a skilled gardening expert or just someone with a few tools?!

Every horticultural job needs well taught skills in order to be carried out properly, whether it be sowing a few seeds at home, or carrying out major tasks in a large public garden or nursery- 'if a job's worth doing it's worth doing properly', as the old saying goes. An example- on the nursery we do a lot of watering by hand (with hosepipes instead of just irrigating everything). Each batch of plants has it's own watering requirements; freshly potted plants need very little water compared with thirsty plants like Escallonia or Ceanothus, and also plants with large flowers (like Camellias for example) can spoil if they are irrigated and their flowers get too wet, so hand-watering helps to keep the crop presentable and hopefully thus saleable! Watering by hand also presents many problems- you have 'the usual suspects' that need watering every day when in full growth, and even within a batch of reasonably damp plants there can be a plant, usually at the back, which needs water. The tricky moment comes when you have to make a judgement; does the plant need watering now, or will it be OK until the next watering shift? That judgement is a skill that takes years of valuable experience to hone.... 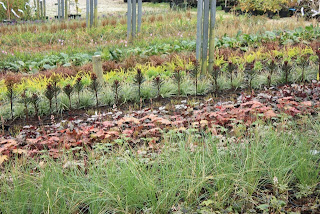 As these freshly potted plants grow they will need different care regimes and will pose different challenges.

Likewise with weeding; if you are going to clear weeds from an area of garden or batch of plants you must have enough botany under your belt to identify a plant, often from it's leaves and not flowers, and make a judgement call- friend or foe? Get it wrong with these jobs and your customer/manager will be... somewhat displeased! 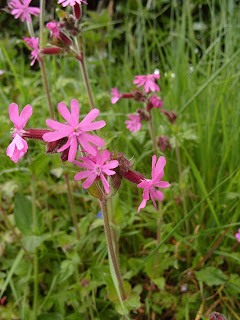 Friend or foe- don't get it wrong!

To be done properly horticulture takes skill, and lots of it! Practical skills tending a garden or growing plants are every bit as worthwhile as being able to repair a car or speak another language, and it is the ability of gardeners (amateur and professional) and nursery people/retailers to apply their skills that gives Britain it's reputation as a gardening nation.

Long live horticulture!
Posted by Pots and Polytunnels at 13:06 No comments: