I want to tell the world; I'm in love! My heart is aflutter, there are butterflies dancing in my tummy, and every dream and waking moment my mind is taken up with romance. I met my new love at the Spring show at RHS Rosemoor a few weeks ago. I wore blue, she wore enticing shades of red, pink, cream and mauve. She... is Rhododendron.

I've never really felt anything toward Rhododendrons before, but this year has been different. Working on a nursery I'm subjected to the 'usual' hybrids ('Christmas Cheer', 'Albert Schweitzer' etc.) which are OK I guess, but many decades of breeding has bred out the subtlety and charm of a very variable genus. The drive to generate monsters with brash heads of colourful flowers has taken away the joys of flower shape, the arrangement of flowers in the truss (flower head), subtle nuance of colour. What today's gardener buys is little more than a bushy spring bedding plant; showy flowers for a few weeks then you're left with a depressing dome of leaves for the rest of the year.
For me it is the species and species hybrids that hold the most appeal. There are around 1,000 species of Rhododendron in the world, growing in the Far East and with a few in northern Australia. While some grow into large trees others make diminutive shrubs. Many grow in harsh conditions on mountainsides where they have to endure hot summers and cold winters, as well as frequent bitter winds. The diversity of the genus Rhododendron is alarming to a 'newbie' like me, with species lumped into subgenera and sections; the best advice given to me was to see as many Rhododendrons as possible before trying to learn about their complex taxonomy!
Although individual flowers on species Rhododendrons don't last very long (but neither do the flowers on the hybrids), the display each spring is always impressive, especially when the plant gets to a good size and bears dozens of trusses. Some of the larger species make trusses about 12" (30cm) across or more, while the smallest species barely get more than 1/2" (about 1cm) wide. Regardless of size, each flower is perfectly arranged.
Species and species-cross Rhododendrons are seldom simply good in flower, and this for me is what differentiates them from the hybrids. Hybridisers have raised neat mound forming varieties, whereas species Rhododendrons have a range of habits from tight low shrubs, to more open habits, right up to widely branching trees. Similarly the hybridisers have generated hybrids with dull, leathery leaves that rarely differ from one hybrid to the next, and have bred out some of the more characterful leaf forms.
The larger tree Rhododendrons also boast interesting peeling bark, but obviously you need to grow them to a good size to enjoy the best effect!
To add a little confusion the genus Azalea has been merged into Rhododendron. This hasn't caused as much chaos as originally expected (unlike the friction around the renaming of Dicentra and Schizostylis!). Deciduous Rhododendrons (formerly Azaleas) are mostly delightful- I say that because I've not yet seen a bad one... As with evergreen Rhododendrons the aims of breeders has been to create compact heads with larger flowers, and this isn't always appropriate. If the flowers of Rhododendron quinquefolium (below) were all in a tight truss they would really lose their charm.
I don't know how long this relationship will go on, but for now I'm certainly very happy with my new-found love.
Posted by Pots and Polytunnels at 04:59 No comments: 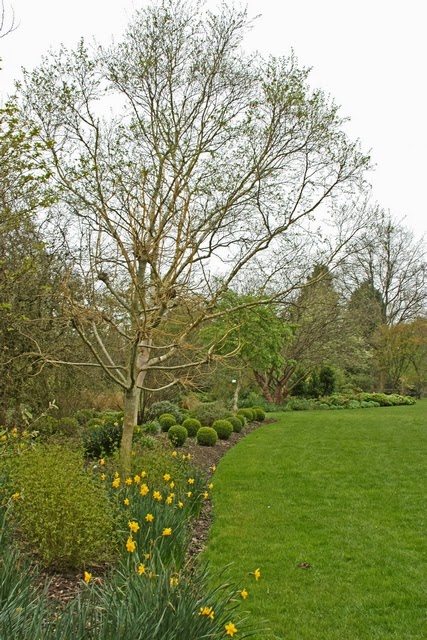 With all the publicity around the 150th anniversary of the Hillier Nursery I felt that it was time to make the journey to the Hillier Gardens in Romsey, Hampshire. I'd been told great things about this arboretum but still didn't know what the expect. Armed with my camera, several lenses and a packet of Hobnobs I set off to see what I could see.

First a little history; the Sir Harold Hillier Gardens (SHHG) was begun in 1953 when Sir Harold Hillier bought Jermyn's House near Romsey to house what he hoped would be the most comprehensive woody plant collection possible. In 1977 the garden was transferred to a charitable trust run by Hampshire County Council and is now revered the world over. The collection is still being added to, and is now 180 acres in total!

After the mildest winter on record gardens are a little confused, and the SHHG is no exception. Nonetheless spring was in full swing, with flowers, catkins and unfurling leaves everywhere. Here I will share some of my highlights...

Posted by Pots and Polytunnels at 10:25 No comments: