I was brought up on heritage; National Trust properties, steam rallies, museums, old buildings... since I was very young I have respected old things and I've long held the belief that it's generally a 'good thing' for us to preserve all that is good about our heritage. In the last few years I've come to reassess my beliefs; is a 30 year old car a classic or a rustbucket? Is a big old cottage in the country really all that good if it's damp and the roof's falling off?! Do we really need 'Sounds Of The '60s' on Radio 2 every Saturday morning?!


It's good to challenge your ideas. Occasionally weighing up your arguments keeps you fresh and makes sure that you're wholly convinced by what you're arguing for. Sadly though there are plenty of people around who won't question whether it's time to let go of certain things. The National Trust takes on more and more property to preserve for future generations, while across the UK villages try to raise vast amounts of money to stop underused churches from falling down!

Heritage fruit is an area that seems immune from criticism. Through the incredible work of a few hardcore apple enthusiasts many old varieties have been saved from extinction and are now being grown in collections around the UK. Time was when most areas had their own local varieties, but the traditional apple areas in the South West were particularly rich. Over the years many of these varieties have disappeared due to lack of propagation, old age, housing on old orchards/gardens, lack of interest... what's missing from this list? Some trees will have been rubbish!

How can an apple tree not be good? Some old varieties are less than reliable, fruiting every two seasons rather than every year, only netting half a crop before we've even got to the fruits. Fruits can be insipid, bland and pithy, and can quite often be very small. Trees are often more prone to scab and canker, and some varieties can need an absolutely perfect season to get anything meaningful from them. Modern varieties have been bred to provide more reliable fruiting (each year!), to provide consistent size and flavour. Maybe they don't have the character of the old apples, but they more than make up for it with performance and disease resistance!

I say 'modern varieties' because actually some of the apples popular today aren't exactly new; 'Bramley's Seedling' is a popular cooker from 1856! Why has 'Bramley's Seedling' remained so popular? Because it fruits well/reliably and is pretty disease resistant. While modern tastes tend to lean towards dessert apples, 'Bramley's Seedling' has stood the test of time simply because it's reliable and needs no improvement. Will modern varieties still be popular in more than 100 years?
The quality of the fruit is pretty well the whole point of growing any apple variety. While texture tends to be down to the variety, taste can vary wildly from season to season, as well as from location to location (assuming the same variety). Trees grown on vigorous rootstocks but on poor soils tend to have better flavour, while those grown on small rootstocks in good soil can be a bit lacking. Without doubt the freshness of the apple has an enormous effect on the flavour, and this is where I have issue with those who blindly believe that heritage apples are inherently better than modern varieties.

Let's take for example, two lovely shiny apples. One is a commercial variety from a supermarket, while the other one is a heritage variety straight from the tree. In a blind taste test you would probably end up choosing the heritage variety. Why? Because it's fresher! Once any apple is picked it starts to lose its flavour. A supermarket apple will have been picked days or even over a week earlier, all the time its sugars breaking down, while the one fresh from the tree will be full of sugars and flavour. The supermarket fruit will have to be in exceptional condition to be anywhere near as sweet and juicy as the fresh fruit (and this applies to everything- try raspberries from your own canes as opposed to supermarket pre-frozen ones). Now let's turn this scenario around, and take a fresh modern apple from its tree and compare it with a heritage apple that's been stored... I doubt anyone would want to go for the heritage one- freshness is key! I remember, when I still worked for my former employer, a customer coming up to me to complain about his apple tree (a 'Fiesta' if memory serves); he'd bought this thing and by the time he and his family had eaten their fill of apples, used them in apple sauces and pies, juiced some and frozen some, he was sick to death of them!
Popular heritage apples tend to be the more reliable varieties with fruits that store well; most people couldn't eat the entire crop of an apple tree when it ripens! Fruits that store well are those with more solid flesh and more stable sugars, but these are a minority in the heritage varieties; many stopped being grown simply because they didn't store well, and were in sharp decline way before more modern varieties came onto the market.

I'm not saying that these heritage varieties don't have a place in modern gardening. With names like 'Pig's Nose', 'Cornish Gilliflower' and 'Catshead' who wouldn't be sucked in by their interesting and romantic names? All I would say with heritage apple varieties is that you should grow them because you want to grow heritage apple varieties; if you just want a nice big crop of apples each year then go for something more modern. If you have a large space and want to have an orchard filled with old varieties then go right ahead, and I hope you enjoy the fruits of your endeavour.

If you want to know more about apples and their varieties you might enjoy this website: http://www.orangepippin.com/
Posted by Pots and Polytunnels at 09:01 No comments:

Many of you will know the events of last year, a year that changed my career... Many would probably say (quite rightly) that I should just let things go, but I do find the anniversaries of key events to be a good time to take stock of where I am.

On August the 5th 2014 my former employers called a meeting. It was to be a big meeting; the whole business closed early so that all members of staff could be spoken to about 'the direction of the business'. Although colleagues called my cynical I knew it was going to be big news and it was going to be bad news, and I was right.

The company knew best. They had consulted with the best minds of British gardening (although didn't name names) and had had their beliefs confirmed; British gardening is "dead on its feet" and it is simply not viable to grow plants and sell them. Gardeners aren't interested in plants any more, and as such there is no point in the nursery (as a business) focusing on plants.

To hear that so many jobs were going was terrible, knowing from day one that mine was assured (no production, no production staff!) was galling, and the fact that all bar one of the job losses was in horticulture showed absolute contempt for horticulture! During the following weeks and months we all had to go through a horrendously drawn out legal process, but soon enough all of my predictions of who they were targeting came true.

A year on from that meeting and life is awesome. I'm building up my own business, still working for another nursery, and I'm back to being positive about my career. My former manager called me "boring" and had contempt for everything I did, but now my world is filled with people who appreciate my knowledge and skills. I wake up each morning knowing that I will spend my day doing what I love, without having to be immersed in what I've now realised was an unhealthy social atmosphere. I spend my time growing plants, selling plants, planting plants, caring for plants, photographing plants... As Confucius said "Choose a job you love, and you will never have to work a day in your life"!

I do miss a few things; the nursery had an extraordinary range of plants, with a huge collection of Camellias and Fuchsias as well as lots of trees, shrubs and perennials. This diversity kept me on my feet and meant that there was always something new coming into season. I also worked with a lot of really good people, most of whom we victims of the 'cull' and are now also out making their way in the world. There were also lots of polytunnels to work in when it was raining! Not a day goes by when I'm not glad to be away though...

In the end I'm confident that I will be proved right; as that business has focused its efforts more and more on its cafe and giftware its core of loyal customers have gone to other nurseries and garden centres. Barely a week goes by when I don't hear at least something about bad service (one of my gardening customers was aggressively sold a dead plant!) or something to do with the place. Good nurseries are sadly thin on the ground, whereas cafes aren't; thankfully their loss has been the gain of a lot of smaller nurseries and garden centres in Devon and Cornwall, and these businesses are reaping benefits. 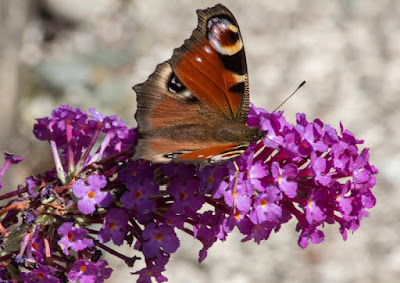 Anyway I would like to thank again everyone who's given me kind words during the last year. It hasn't been plain sailing all the way, but I know that what seemed only a year ago to be a disaster has become a great triumph. Thank you all!
Posted by Pots and Polytunnels at 22:50 No comments: